There was an error retrieving images from Instagram. An attempt will be remade in a few minutes.

A few days ago, We all went to the Great Barrier Reef in Australia which is the biggest living organism on earth. The Great Barrier Reef is so large that it is visible from space! We took a boat with a company called ‘Quicksilver’ to a huge pontoon to an outer reef called the Agincourt Reef at the edge of the reef shelf where I was about to go on a tour underwater around the earth’s largest reef system.

We boarded a catamaran which would take us to the floating pontoon. My dad and I rented an underwater camera to enable us to take photographs of the reef. A lady gave us a piece of paper that showed the day’s timetable. There were two choices and I wanted to try scuba diving, but the age limit was twelve or over, so I decided to go on a snorkelling tour with my dad around the reef.

A few minutes later, the boat suddenly stopped in the middle of the ocean! I was really worried that maybe the motors had stopped working, but there was an announcement that said that there was a mother whale and her child just outside the boat! I hurried out and there I saw a huge humpback whale with her calf. Another announcement said that it was likely that we saw a whale because from May to November it is whale season in Australia. It also said that female humpbacks are bigger than the males (females are 45-50 metres long and males are 40-48 metres). After a while, the child wanted to play and was breaching and doing backflips in the water! When the calf got tired it swam away from the boat following its mother. We slowly moved on and left them both alone.

A crewmember named Sam told us a bit about the Great Barrier Reef before we arrived. Sam said that six out of seven species of water turtles are found in the reef. The six species are:

The seventh turtle is called the Kemp’s ridley sea turtle, but they are found in the Atlantic waters from Mexico to Florida. I also found out that sea turtles are able to hold their breath underwater for 4-7 hours! Sam also said about the different types of corals there were at the Great Barrier Reef. He told us that the Great Barrier Reef stretches over 2,600 kilometres. He first told us about Staghorn coral. Staghorn coral is shaped exactly like a deer’s antler and that is why it is called Staghorn. These types of coral are very good builders and can grow 10-20cm per year. Staghorn coral is very fragile and gets easily broken if there are storms. This is good because otherwise they grow so fast they would overgrow the Great Barrier Reef. Here is a picture I took of Staghorn coral:

Sam also told us that most of the coral in the Great Barrier Reef is endangered. when we came back to our villa, I wanted to find out what was the main thing that caused corals to be an endangered species. One of the main thing that was reducing more than 50% of the Great Barrier Reefs coral is the Crown-of-Thorns Starfish. These starfish are very vicious and feed on coral polyps. A single Crown-of-Thorns Starfish can devour eight square metres of coral per year. A female Starfish can lay up to 65 million eggs every spawning season which isn’t good at all. During a Crown-of-Thorns Starfish outbreak, 1000 adults can invade a single hectare of reef. An invasion can destroy 97% of a reefs coral population. Luckily these days, marine biologists are able to kill the Crown-of-Thorns starfish by injecting them with a long needle.

After 2 hours on the Catamaran style boat, we finally arrived at the pontoon next to Agincourt Reef. A pontoon is like a floating platform above the water. As I stepped out of the boat, I could see lots of people scuba diving, snorkelling or just swimming in the huge Ocean. I was so exited and couldn’t wait to see al the different fish, coral, crabs, turtles, more whales or even sharks! My dad and I had our lunch and went over to our snorkelling group. Erica, who was a marine biologist was going to be our teacher for the tour. After Erica told us the safety rules, we got into our gear (a pair of flippers which we put on our feet to help us go faster in the water and a snorkel tube and an all-in-one wetsuit so we wouldn’t get stung by jellyfish), and walked onto a raised floating metal platform that was attached to the pontoon but still in the water. There were benches on the metal platform so that we could adjust our gear before the snorkelling tour and it was very easy to get in and out of the water with flippers on. Erica sprayed the insides of our snorkel mask with a special spray that would prevent our masks from fogging up. Finally, my dad, Erica and I all jumped into the Pacific Ocean, I was in the Great Barrier Reef! 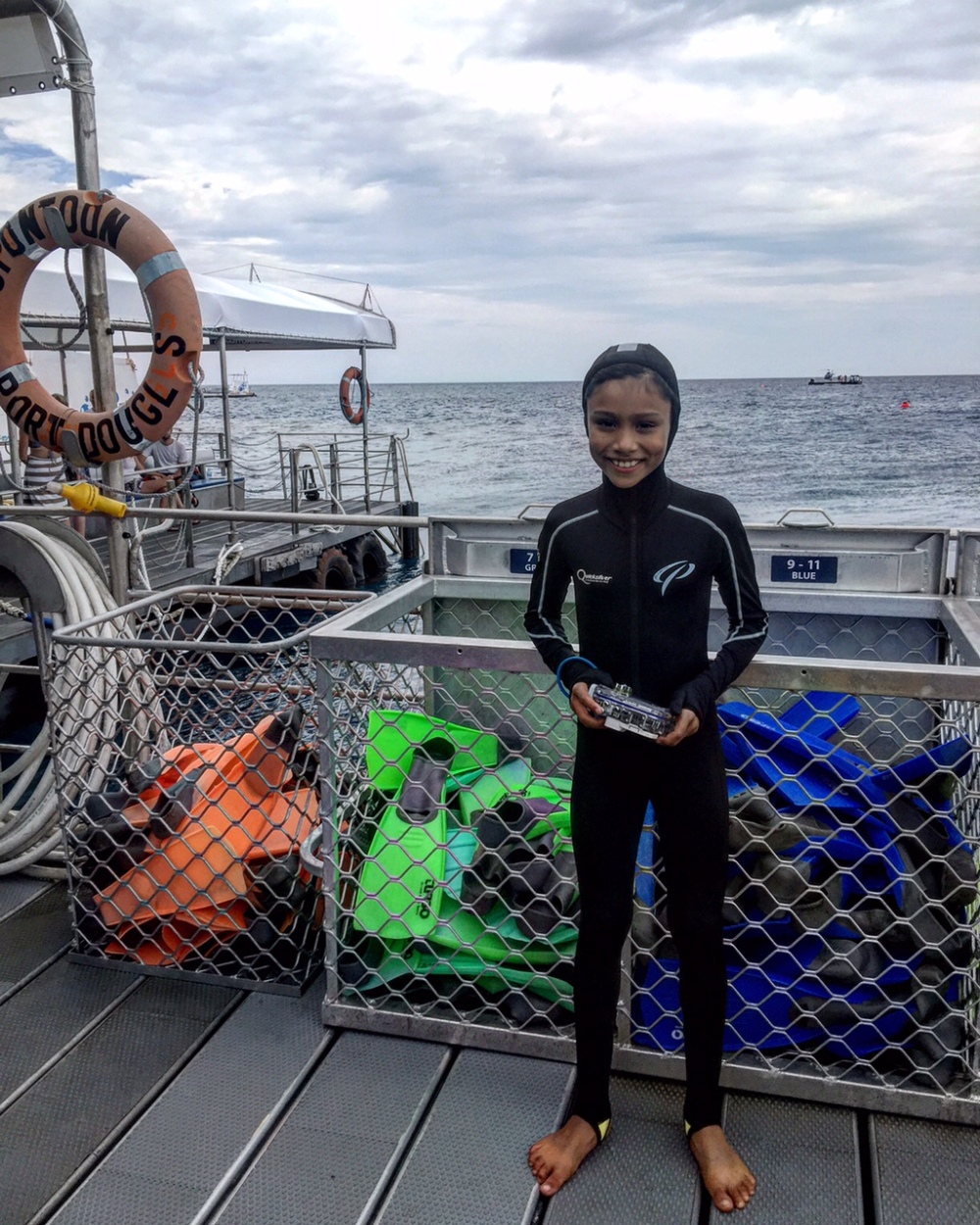 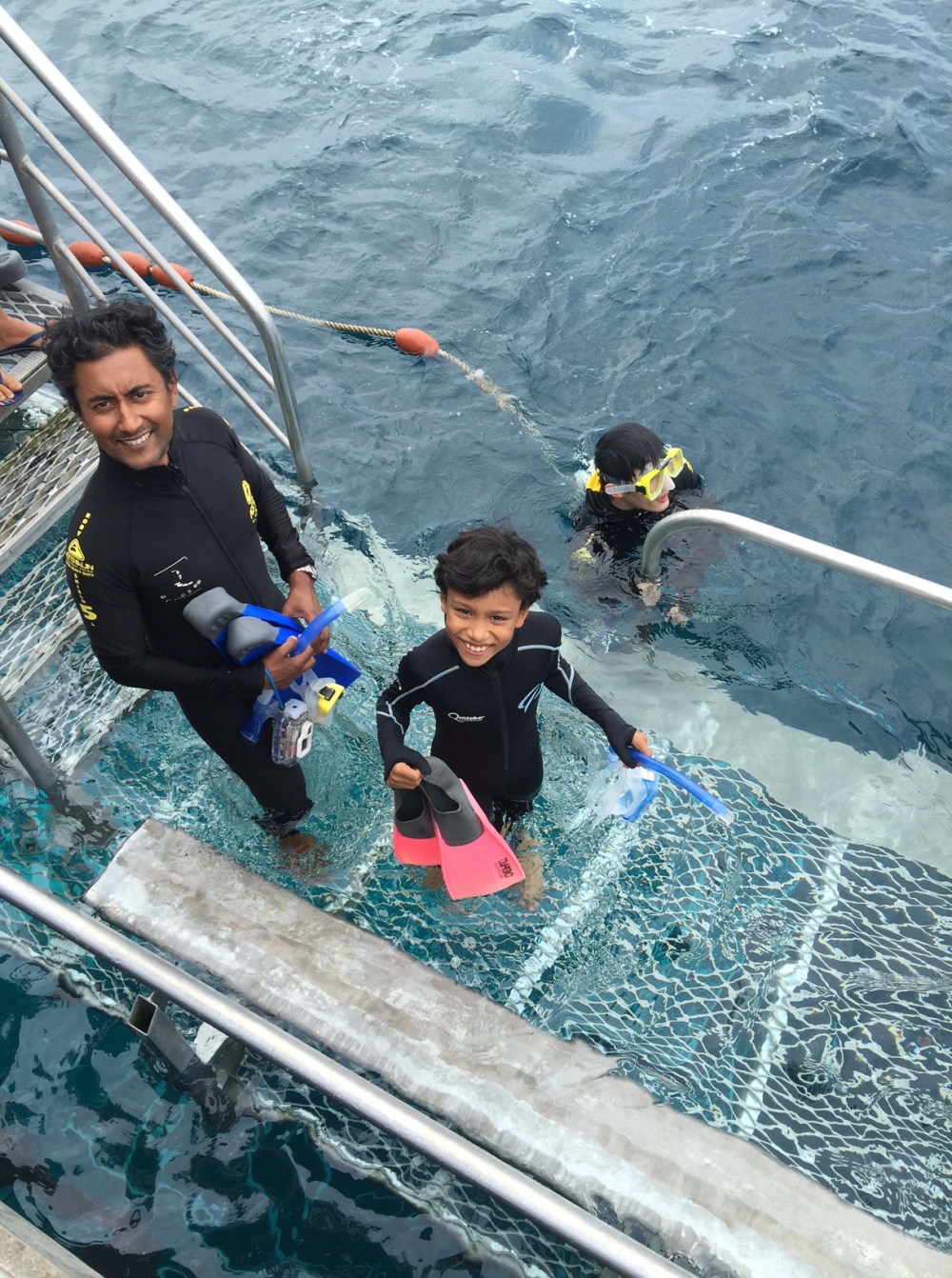 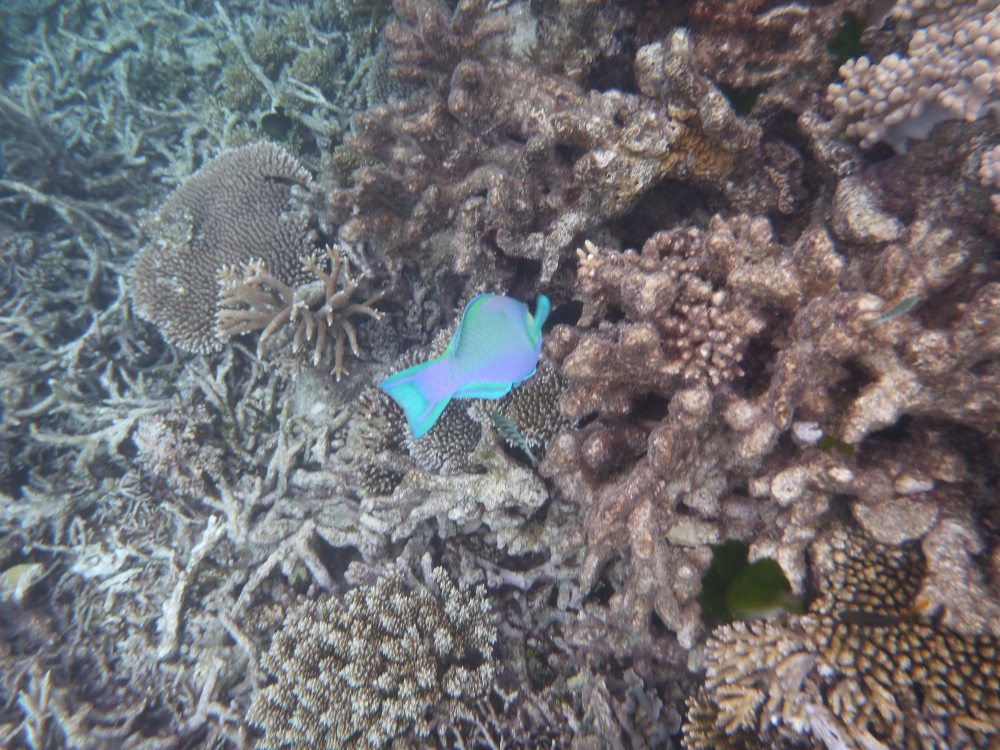 When I looked underwater, I could see so many different coloured fish and coral! It was so much better than I could have imagined. The water was very fresh, but I wasn’t that cold as I had my wetsuit on. The wetsuits also enabled us to swim in the water without getting stung by jellyfish. The bottom was very shallow, but the crew told us not to walk on the coral as it is very fragile and it is an endangered living organisms. 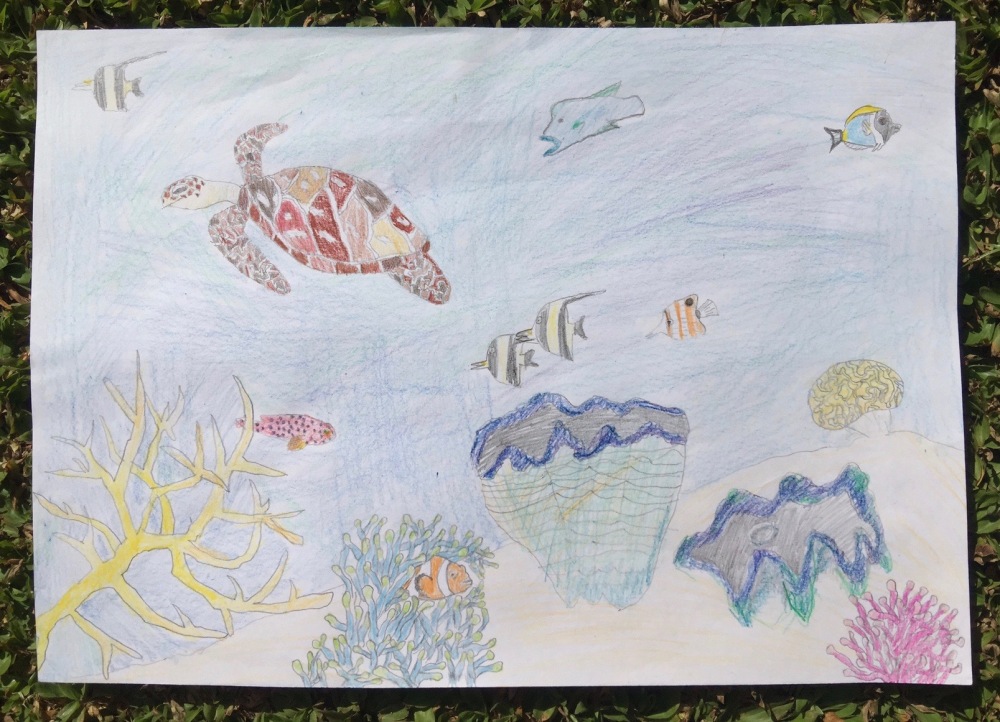 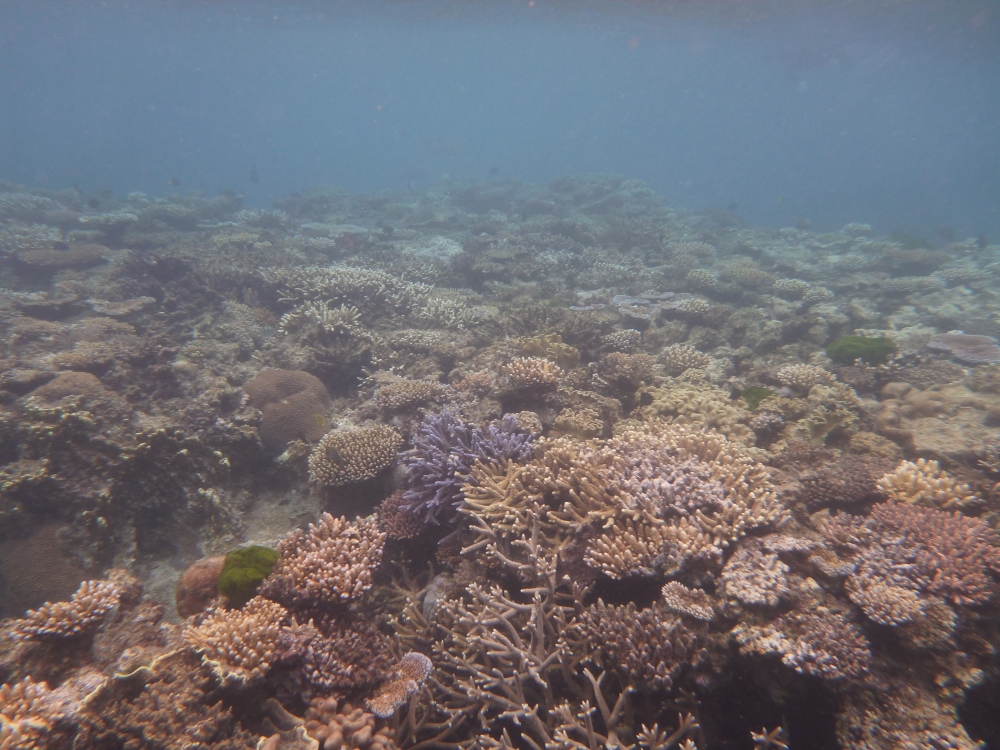 We followed Erica to a spot were there was an enormous open giant clam! She said she was going to dive down to the bottom and told us to see what happens. Erica took a deep breath and dived down to the shallow bottom of the reef. She put her hand inside the giant clam and all of the sudden it closed very quickly! Luckily, Erica escaped just in time and swam up to the surface. Here is a picture of the clam:

As we swam on, I spotted a tiny orange, white and black fish,  It was Nemo (a clown fish)! I dived down to the bottom of the reef and took a picture with the underwater camera. It was as small as my little finger, but it had very bright colours and that is what caught my eye. There are 28 – 30 recognized species of clownfish and clownfish can live up to 10 years in the wild but on average 6 – 8 years. Females lay around 1000 eggs all in one go and the male clownfish will guard the them. 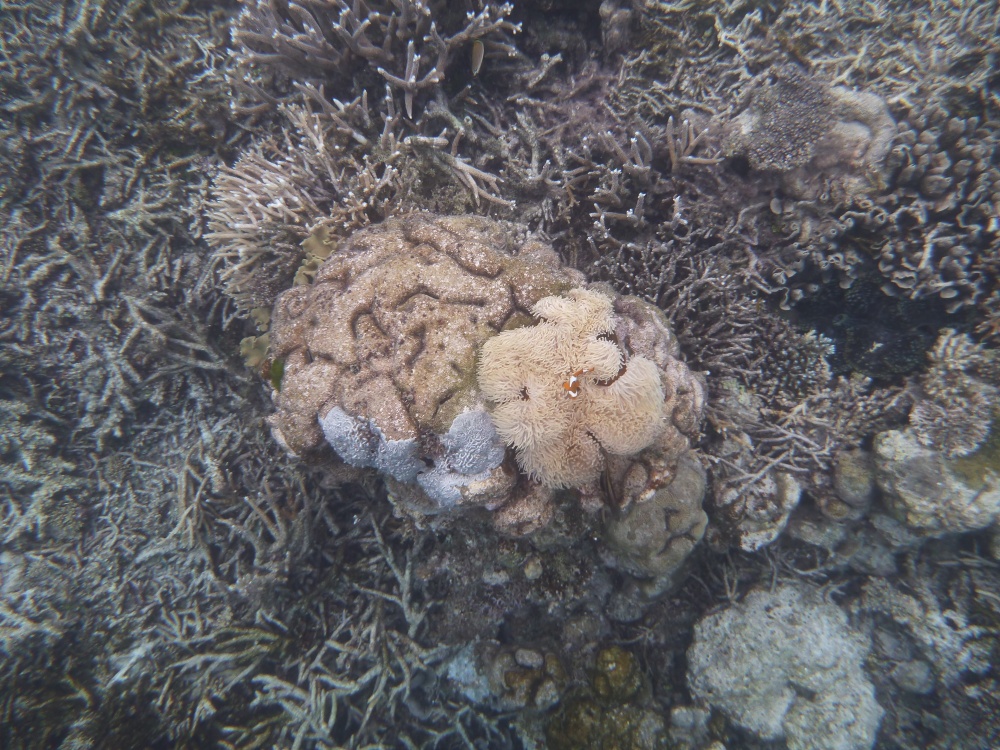 Finally I am going to tell you a bit about what corals eat and feed on. Corals use a variety of methods to eat their food. Most of their nutrients come from the zooxanthellae. Zooxanthellae are several yellow-green algae that inhabit other organisms such as marine invertebrates. Like plants, zooxanthellae use the sun to make food for themselves and the coral. This is why it is important for corals to live in shallow waters as they can get lots of light from the sun. Corals also eat plankton which are tiny animals or plants which float around in the water. Some corals can also ingest very small fish. To catch these animals, the corals use their tentacles to paralyse their prey with its stinging cells called nematocysts. They can also feed on tiny plants or from the zooxanthellae that live inside their cells.

After that it was time to go back and I was really sad that we had to go so soon. We slowly swam back to the pontoon and took off our gear and wetsuits. We boarded onto the fast boat and went back home. The Agincourt reef which is located on the outer most tip of the continental shelf is about sixty five kilometres from Port Douglas but it seemed much quicker on the way back as on the way we were going against the waves but on the way back we were going with the waves.

I really enjoyed myself today and it was probably the best day of my life so far! Unfortunately, my dad and I didn’t see any turtles today, but hopefully we will see lots more along our journey. Today was also the first time I saw a real whale up close and it is now my favourite animal! It was a great experience learning about all the different types of fish and corals.