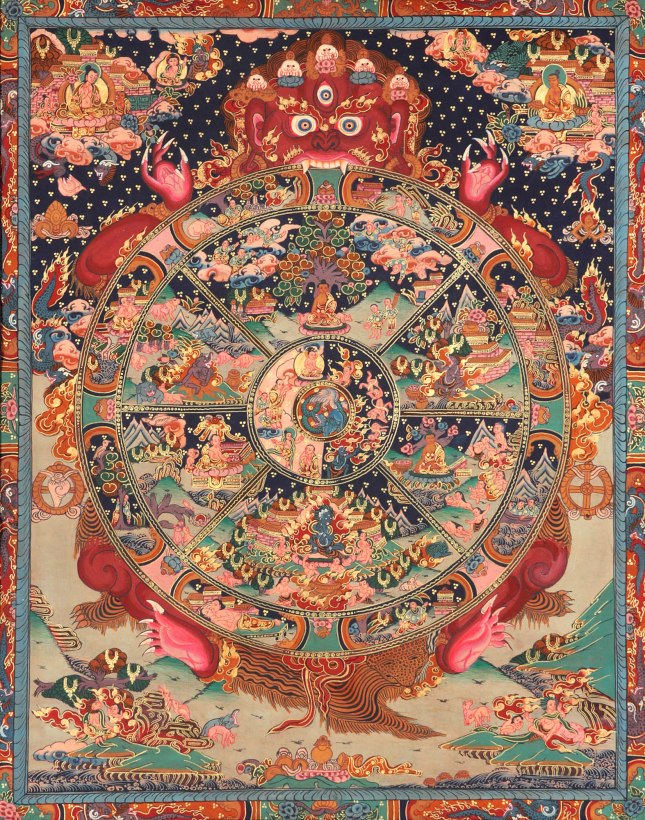 In the Balinese tradition, the principal events of life always come with a celebration.

In Bali, the Balinese calendar is different to ours as they celebrate their birthday (Oton) every 210 days. Even before a baby is born, there are ceremonies for the child.

On a babies first Oton, the parents have his/her head shaved by picking them out one by one to purify the baby.

When the child grows to being a teenager, another ceremony is held called Potong Gigi. This is when the dentist will have to file the teenager’s canines so that they are the same height as the molars. Now he/she is an adult.

Depending on the village, the balinese celebrate weddings either at the family house or at the Hindu temple. The date is set by a pedant (a high priest). There are traditionally two types of wedding: the Nyogoting (also known as Mamaling) and the Mamadik. The Nyogoting used to be similar to a kidnapping of the bride when the parents didn’t approve the wedding. Later, it became a cheaper way to get married since the ceremony is less expensive-looking and the parents of the woman do not have to participate in the expenses of the celebration which is supposed to take place without them knowing. If they can afford it (which most of the time they can) the Mamadik entails prior formalities. The future husband sends a delegation to the home of his fiancée whose entire family will greet the messenger. Then the wedding is held.

Last of all is the cremation, the last ceremony and journey.

In Canggu, we were invited to be part of a traditional Balinese Hindu cremation. We were told that the grandfather of the local village had passed away and was going to be cremated. We were a little surprised as in Europe death ceremonies are very personal and often very sad.

A cremation is when a person dies, the body is burnt so that the smoke and soul will rise into the sky and reincarnate into another human being, where they will come back and start a new life again. There is no permanent Heaven or Hell in Hinduism. When I was younger, my father told me the story of how Siddhartha Gautama became Buddha. At the very end of the story, the Buddhist monks wrapped him in cloth and burn Buddha’s body into ashes like what we were about to see that day.

As we walked towards the village, we could hear the sound of traditional Balinese music. We got out and followed the sound until we saw perhaps fifty people all dressed up in traditional balinese ceremonial clothes walking together along the busy road. I walked a little closer to the front and there I saw lots of men who were part of a Balinese Gamelan orchestra playing large golden Slenthems. A Gamelan orchestra is the traditional ensemble music of Bali and Java. The instruments are all percussive and the most common ones are the Gong which is a bit like a sidewards-played cymbal which you play by hitting it with a round mallet, bamboo flutes, Kendangs (tall drums that come with a shoulder strap) and finally the Slenthems which are like big xylophones with metal bars that you play by hitting them with a small pointy hammer to create a beautiful shimmering sound. The Slenthems were attached to long hollow bamboo that they wore across their shoulders. 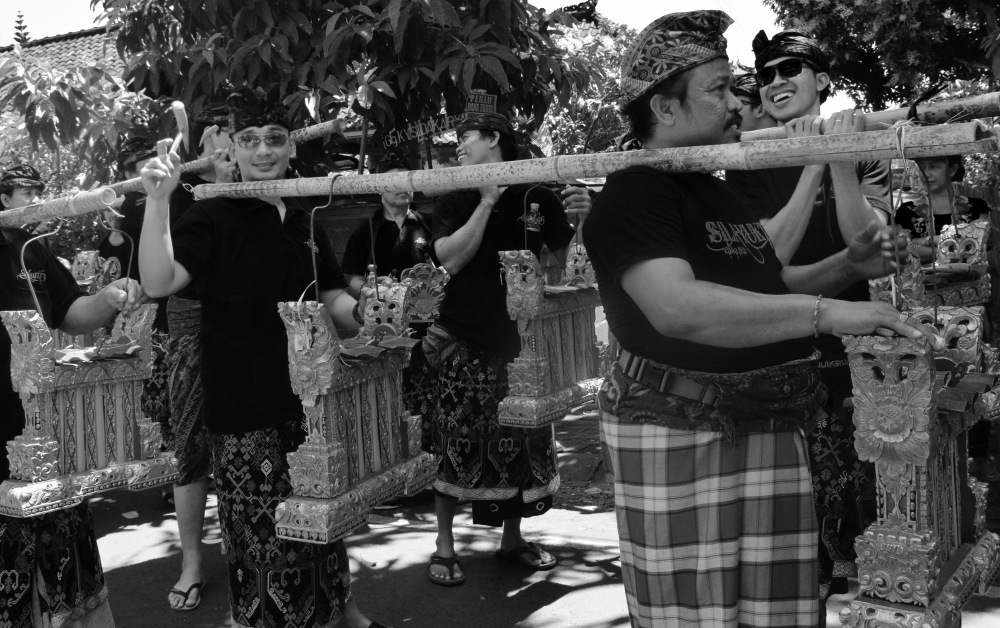 I walked along with them as they played and noticed a small coffin with a portrait of somebody bobbing over the Gamelan players’ heads. I ran to the front to see and sure enough, it was the coffin carrying the grandfather inside. It was placed on a woven rattan mat on top of a platform constructed like a raft with 9 bamboo sticks and flattened bamboo sticks for the base and lifted by many men who had placed the bamboo pole frame on their shoulders. I looked at the portrait at the back of the coffin and just under the grandpa’s face I could see his name: Ketut Ragi. 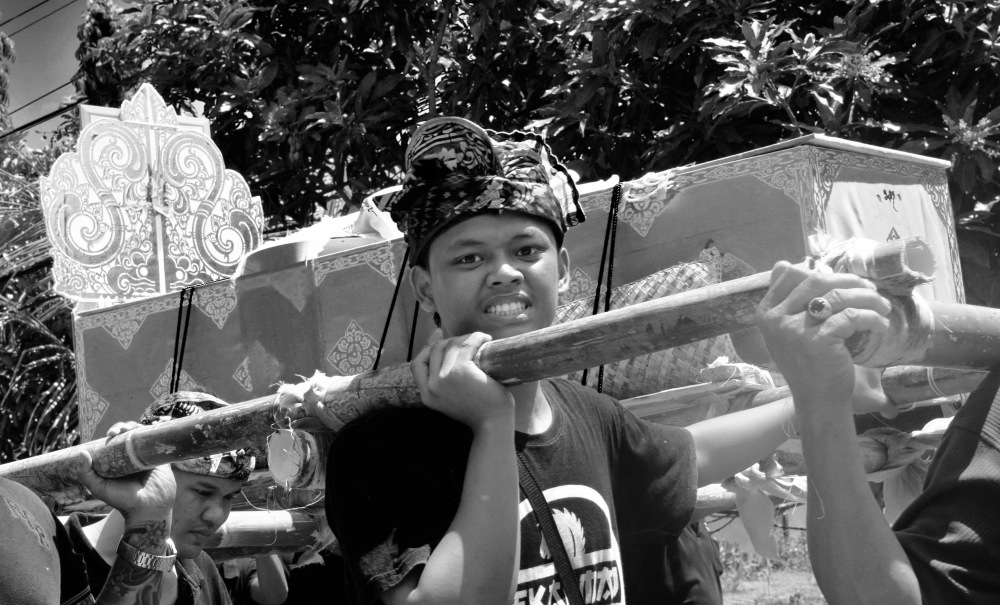 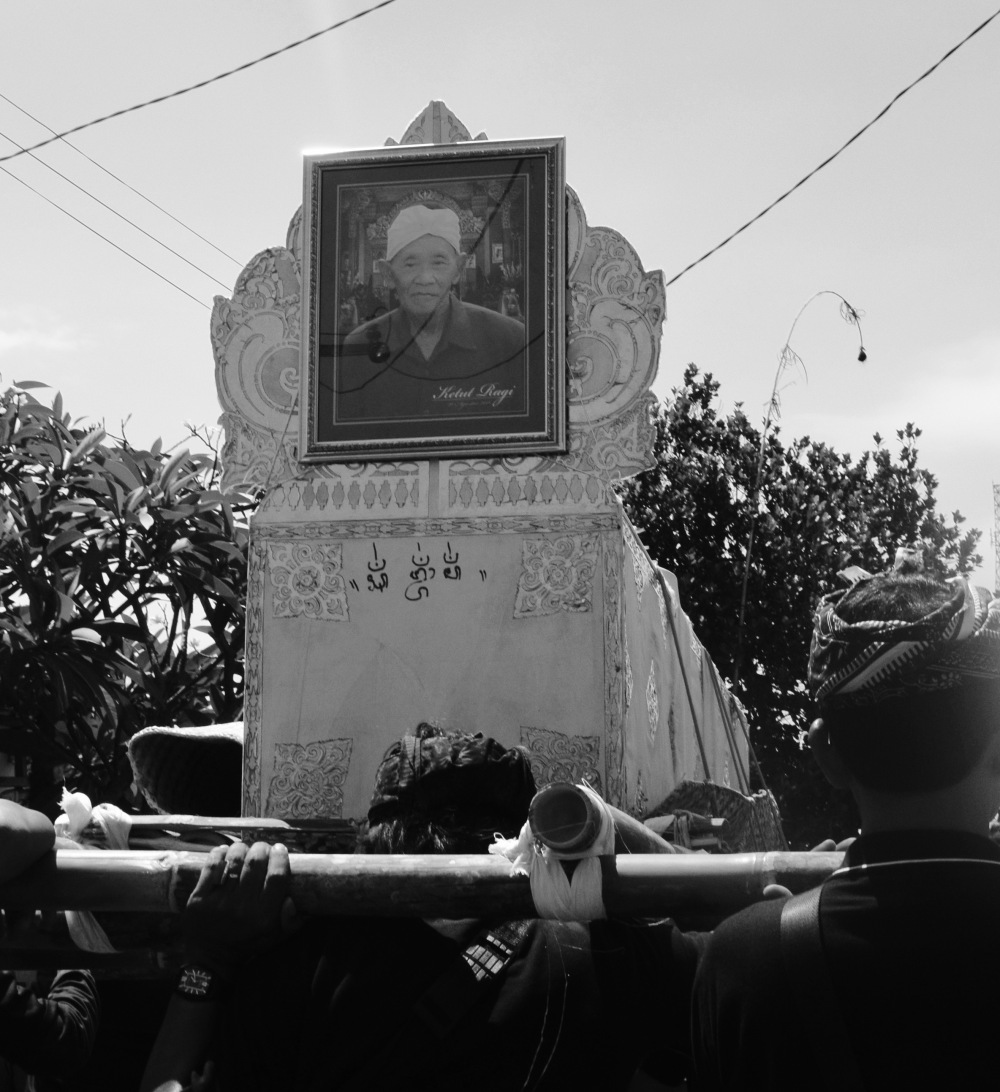 After a while spent immobile in the village, the men walked together as they carried the dead body to where the cremation would be held. Suddenly, we all came to a halt at a junction. Then the men carrying the coffin turned around the junction a few times and then we carried on walking down the road. Lots of people threw coins at the coffin as they turned. When I looked more closely at the coins on the floor, they all had big holes through the middle and looked very old and rusty. They must’ve been the coins that people were still using in Indonesia when Ketut was a child! That is why they were so old looking. We asked a lady walking next to us why they did that and she explained that at every junction they would turn around three times to confuse the demons on which way they were going so that they wouldn’t follow them. The walk was very well organised. A gentleman and his son who were walking with us were giving out water so that we wouldn’t be too thirsty. 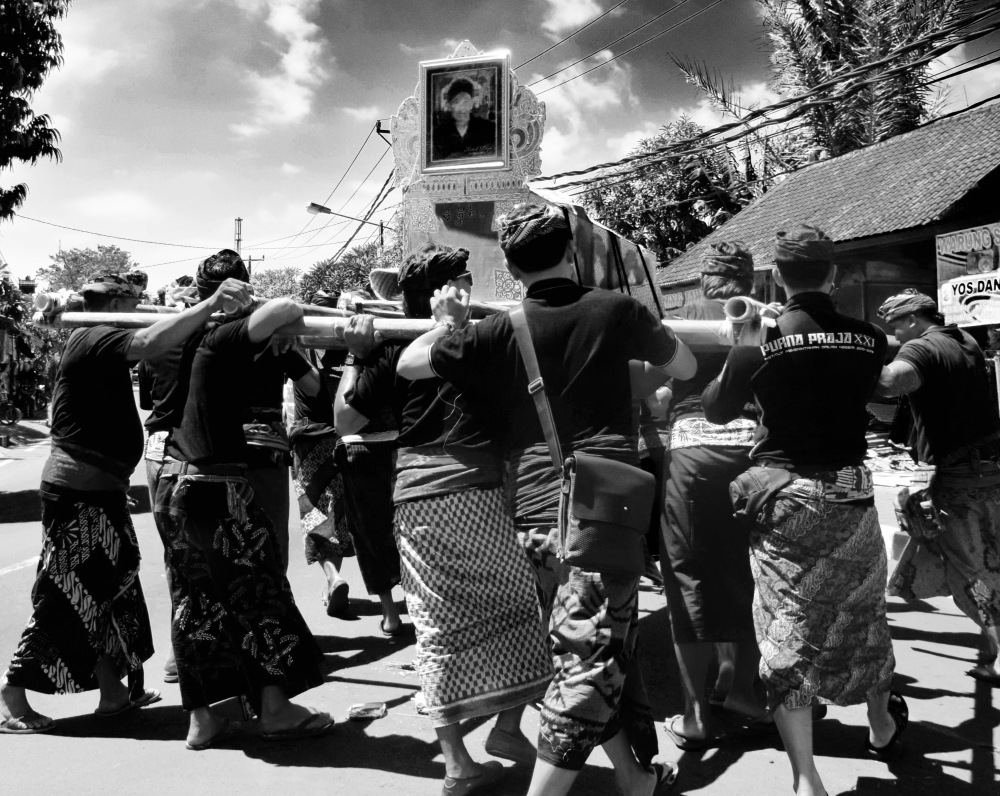 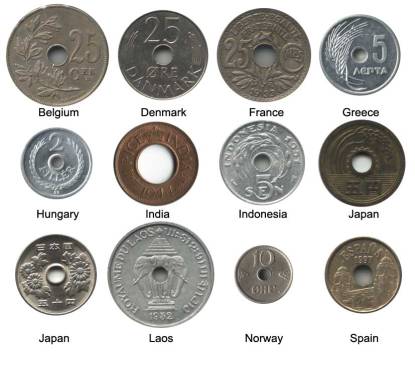 Finally after nearly an hour walk, we arrived at a big Hindu cemetery where there were lots of decorations hung up around the field. The Gamelan players all sat underneath a shelter and continued playing as the men brought the coffin in. 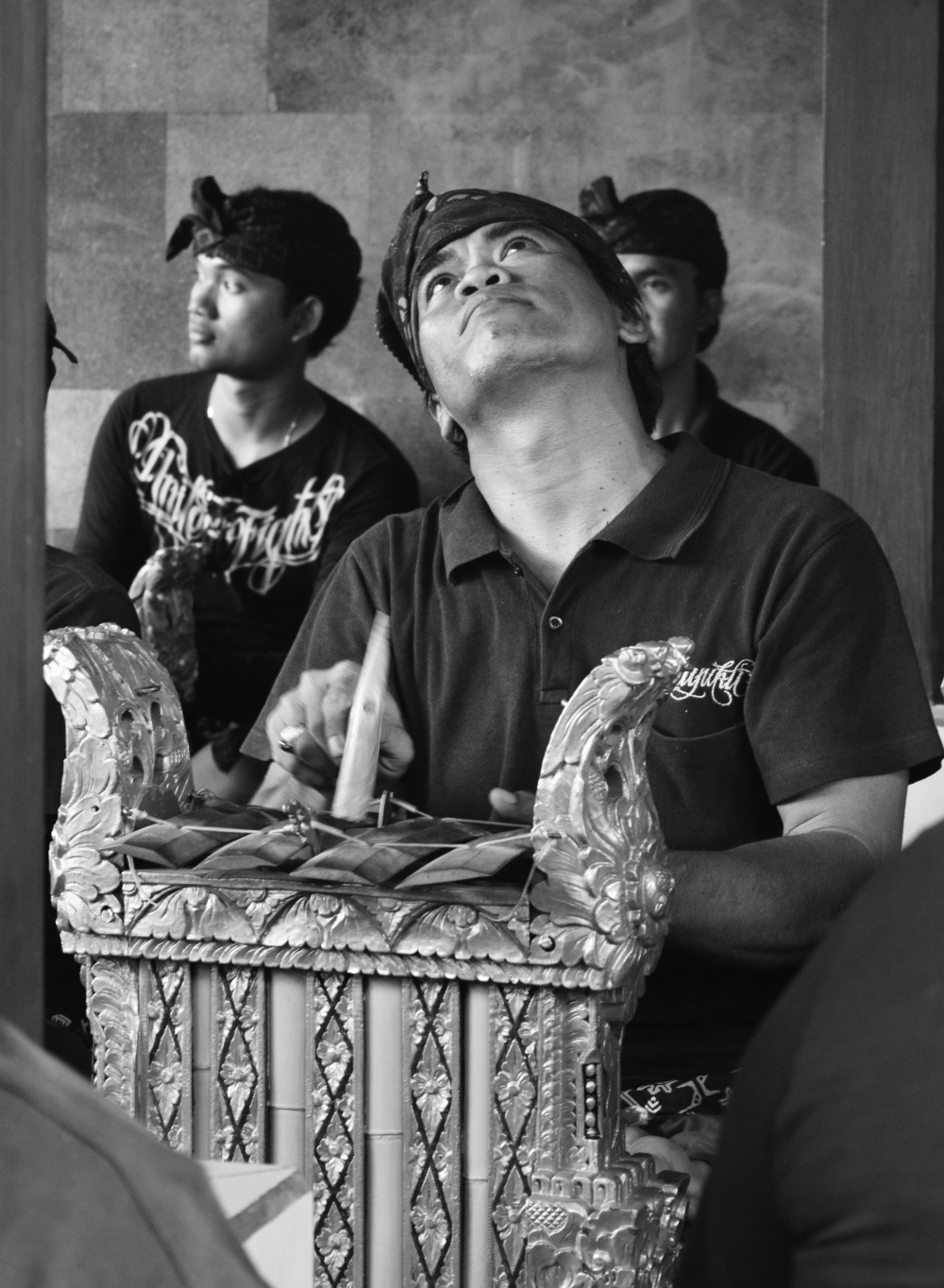 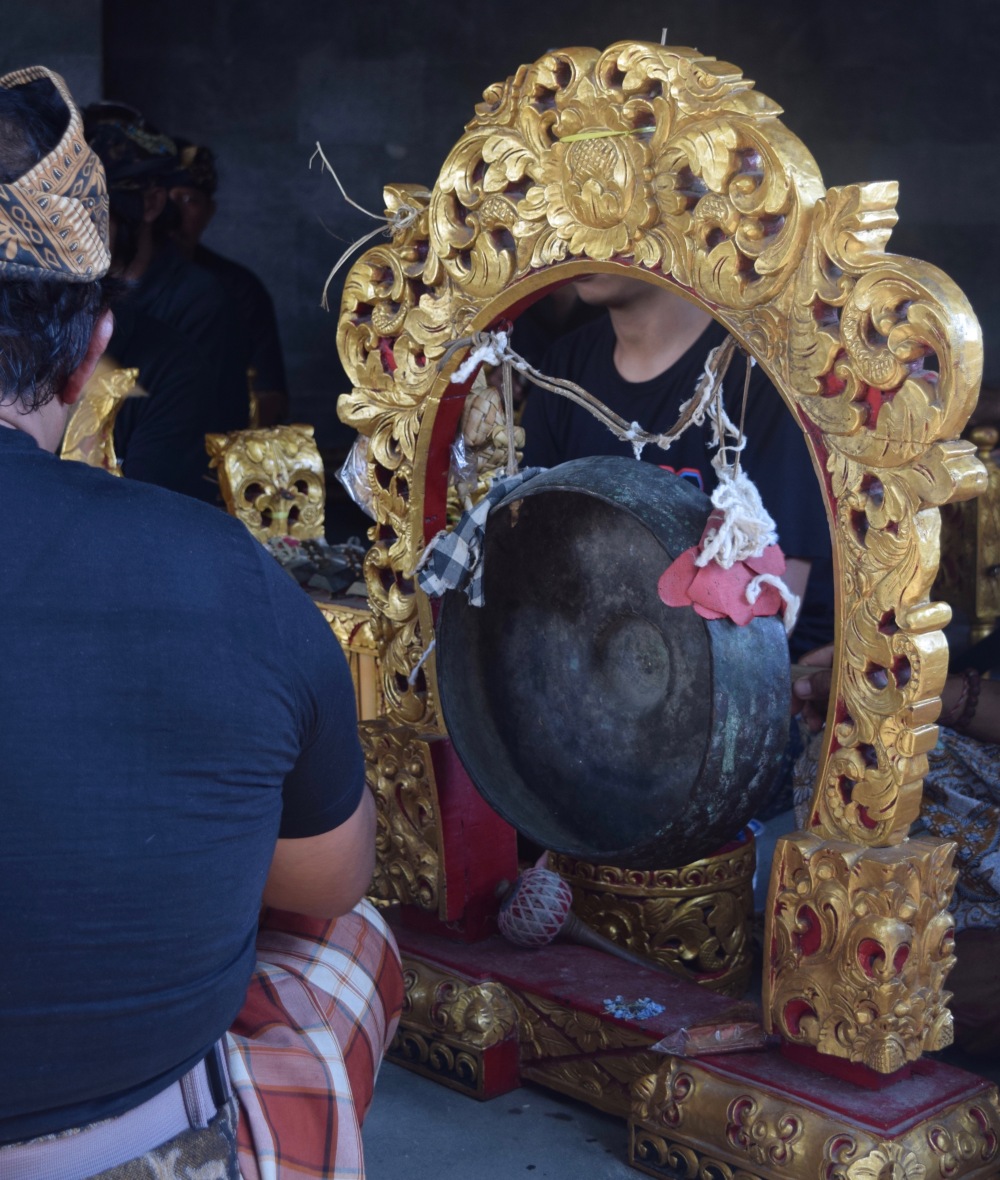 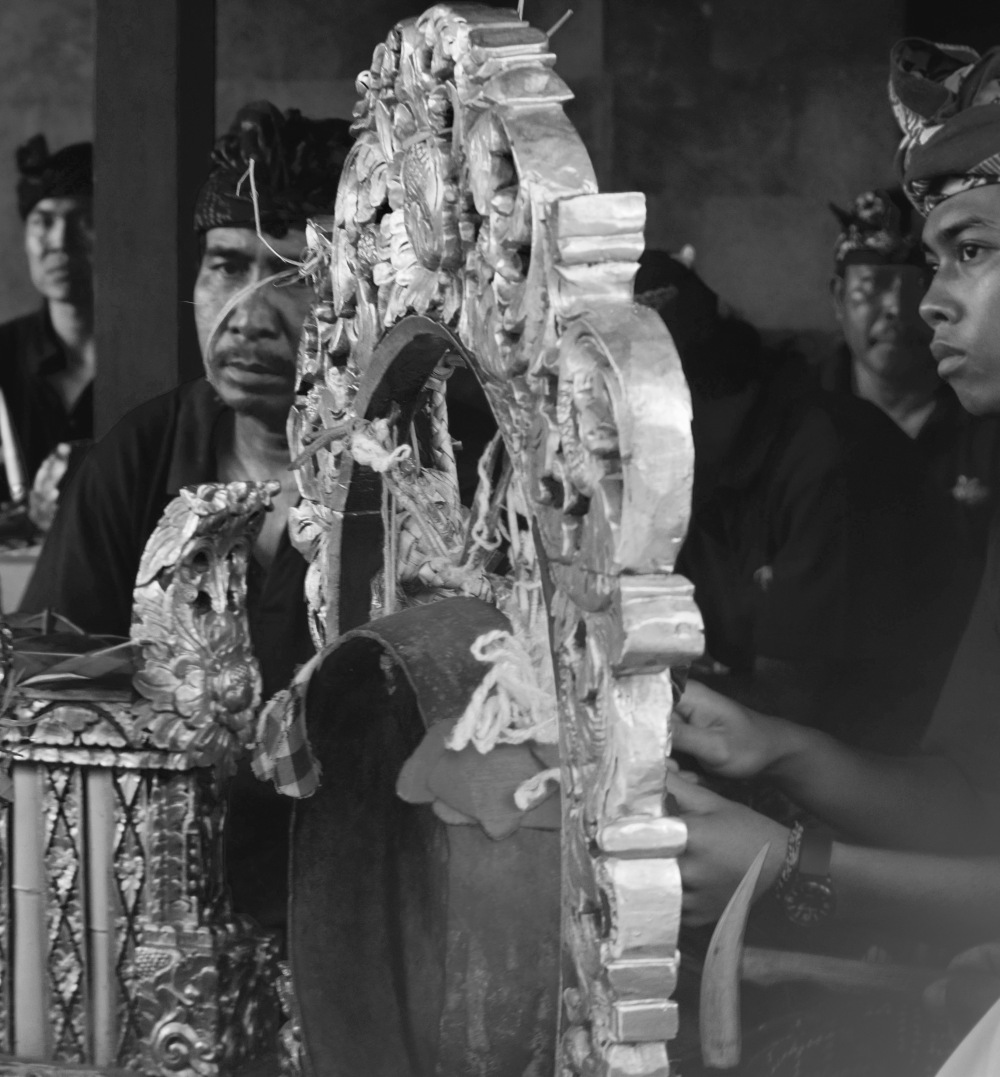 The men took the bamboo platform off their shoulders, placed the rattan mat onto a large stone slab and placed the coffin on top. This is were Ketut’s body would be cremated.

Before the cremation began, my mother pointed out that a brown duck, a little fluffy chick and a piglet wriggling in a bag were attached to a table leg. A lady told us that they have those three animals at every cremation as a tradition. The piglet was in the bag probably because it would be too scared of the fire if it could see. After the cremation they let all three animals go free. 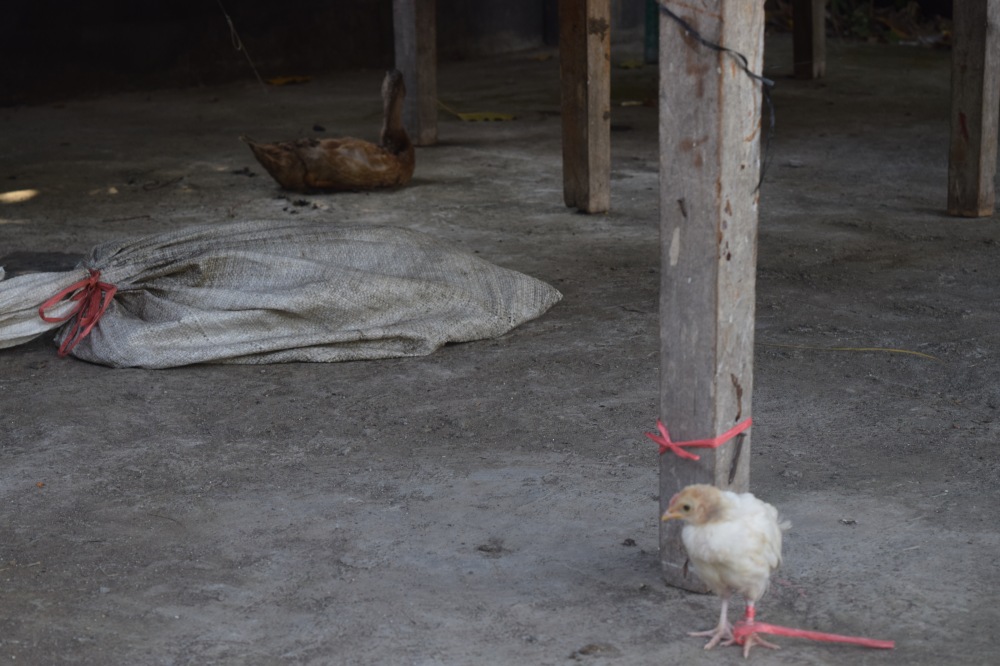 Everyone from the village surrounded the coffin and one gentleman, wearing traditional white ceremonial clothes and a headpiece, took off the lid of the coffin and all the pieces of cloth that had been wrapped around Ketut’s body carefully. He said a prayer whilst sprinkling holy water on Ketut’s body. While he was doing that, lots of ladies all dressed up in magnificent purple dresses sung a low,  quiet song. 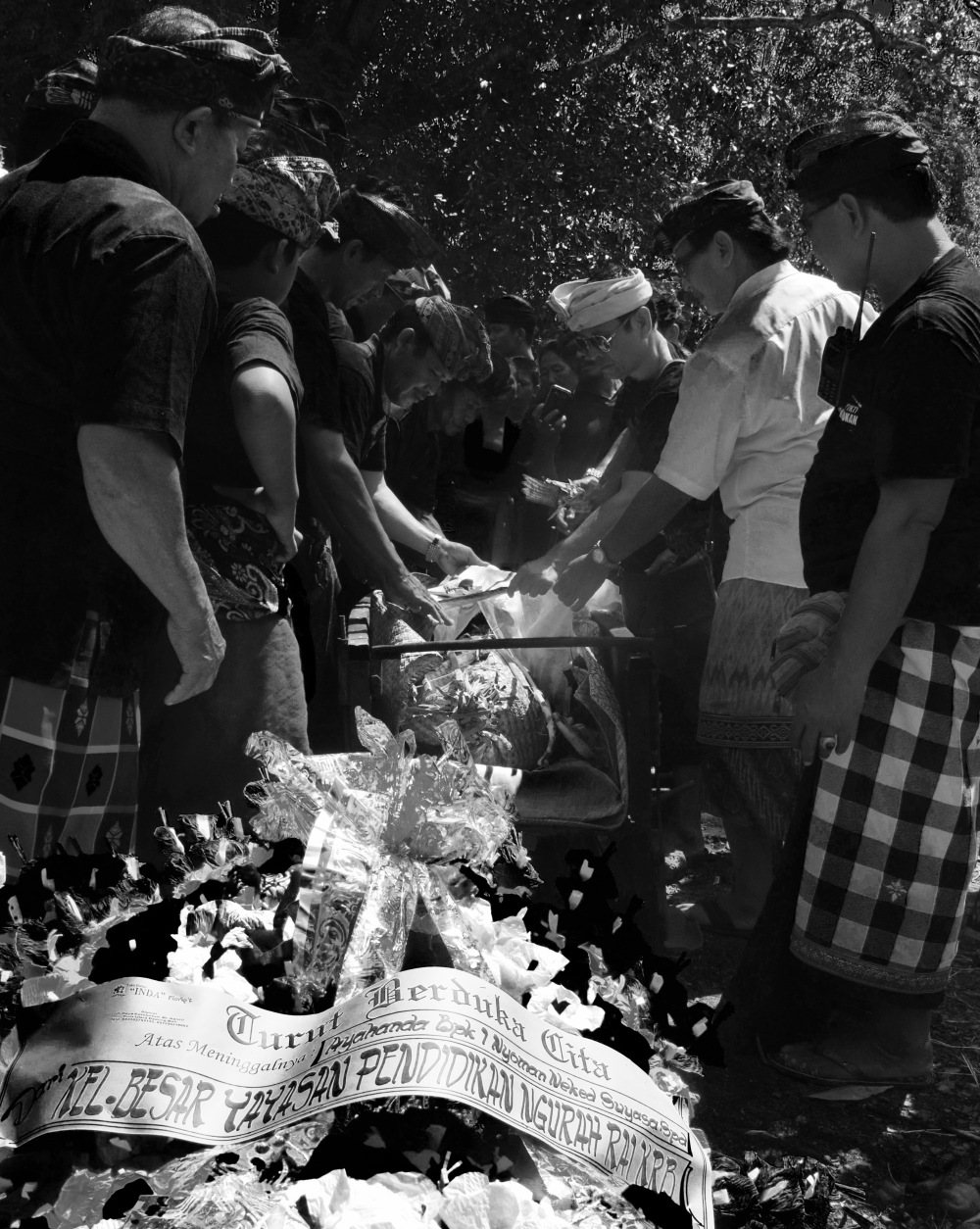 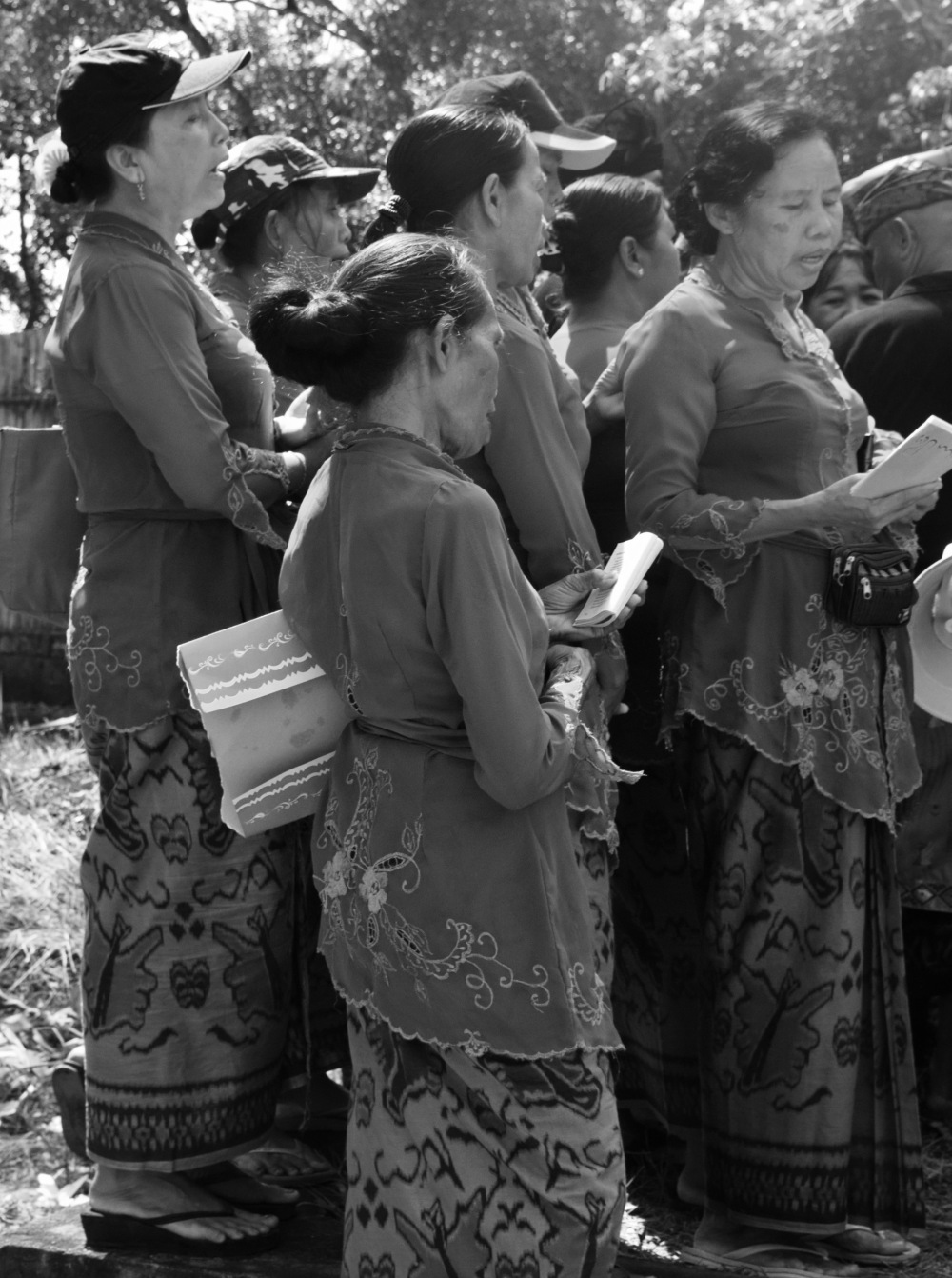 After all this was over, everybody walked back and the gentleman in white wrapped the body up again in the same cloth and the cremation began. There was lots of smoke rising into the air and everything burnt in the end. Nothing was left but ashes. Traditionally, the family collect the ashes and scatter them into the sea on an auspicious day. This day is a day chosen by a priest based on the Balinese calendar. 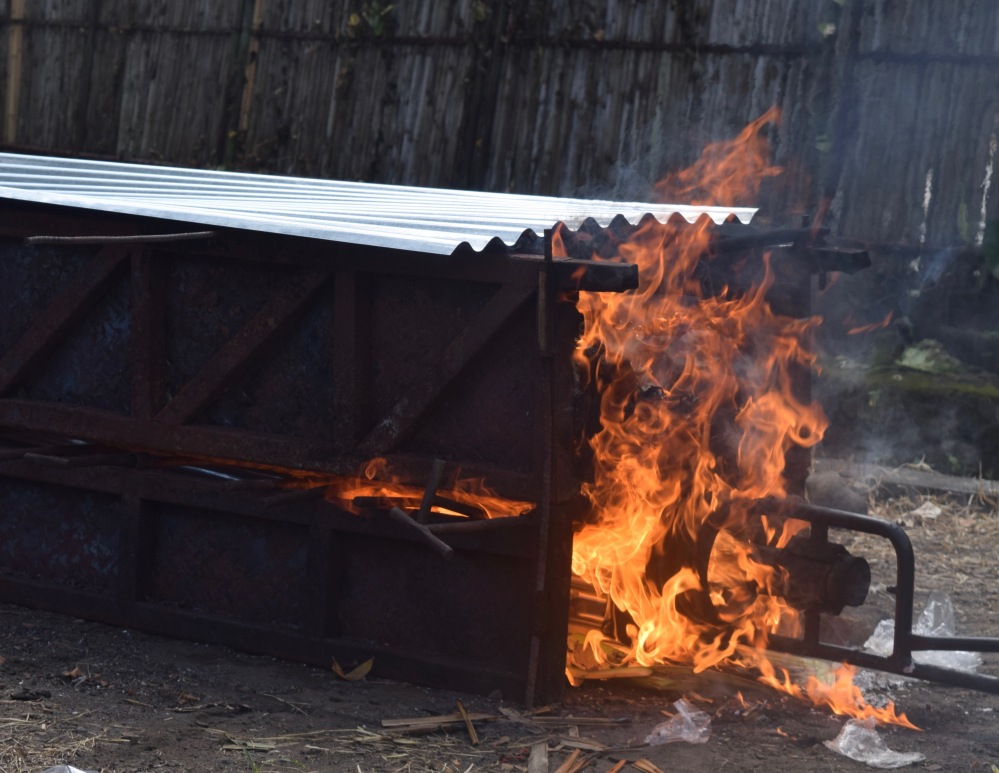 Depending on what region you come from, another ceremony called Nyekhas is held 12 or 42 days after the cremation. People place the portrait of the person in a new tower that they also burn, this way their spirit (which is finally free from their body) will take its place in the family temple along with the ancestors before maybe returning to earth in a new human form.

My mother was worried about me taking part of a cremation ceremony but I did not feel very sad or scared at the cremation at all. Of course I was sad to see Ketut go, but it was nice to see people smiling and wishing him well in his next life. My mother says I am wise because I think that if I had the option together die when I get old or to live forever I would choose to die when I am old as I would find it extremely boring if my life would never have an end. A nice thing about the ceremony today is that it celebrates birth all the way to rebirth. I like the idea of the Hindu culture that celebrates birth up to rebirth and that that cycle of life never stops and there is always a new beginning.

What I really found interesting was how the men carrying the coffin turned around at every junction to confuse the demons which I thought was very clever. I also give great respect to all the people who have taken a lot of time and effort to make all the beautiful offerings I saw that day. I am really grateful to have been part of this amazing experience today and again I wish Ketut a very happy next life.