A few weeks ago, my family and I visited Flores and from Labuan Bajo, we took a small speed boat to an island called Komodo Island where we were going to visit the Komodo Dragon National Park to see them!   Komodo dragons are extremely big and very dangerous reptiles. These lizards only live on the Indonesian islands of Rinca, Komodo, Padar, Gili Motang and other parts of Flores. The dragons can swim but not for more than 500 metres which is why they only stay specifically on these few islands.

Komodos are the largest species of lizard growing up to ten feet in length which is three metres and can sometimes weigh up to 70 kilos! It is known that Komodo dragons are carnivores but scientists have only found out in 2009 that they have a very venomous bite; there are two glands (organs) in the lower jaw that secrete (produce and discharge) poisonous venom. Fossils very similar to Komodo dragon fossils have been found in Australia for longer than 3.8 million years ago, but its body size stayed on the islands of Flores, where it is found today and for over the last 900,000 years.

We left at around 10 o’clock. Ronnie was going to be our guide for the day. We sped off as Ronnie explained to us today’s schedule: we first were going to Komodo island to see the dragons, then we would go to a beach called Pink Beach where we would stop to snorkel and see the amazing ocean life and bright red corals and then finally on our way back we would stop at Manta Point to see the Manta rays!

It was going to be such a fun day and I couldn’t wait until we arrived. Before we left Labuan Bajo, Ronnie told us that there had recently been a  Komodo dragon attack on the island. A mother put her two year old child to bed while she was cooking lunch. While the baby was sleeping, a big male Komodo dragon sneaked into the bedroom and took the baby. It was very sad and I was very scared!

The boat trip was about 2 hours long and wherever I looked around there was always an island in view, inhabited or not. Unlike most islands in Indonesia, the name Flores was given by the Portuguese, from Cabo de Flores (Cape of Flowers) in the 16th century because of the Delonix regia trees found here.

Finally, we arrived at Komodo island. We all stepped of the boat and onto a long pontoon that led to the beach. I spotted a sign saying ‘Komodo Island National Park’ and I got really excited. I couldn’t believe I was about to see a real life dragon! 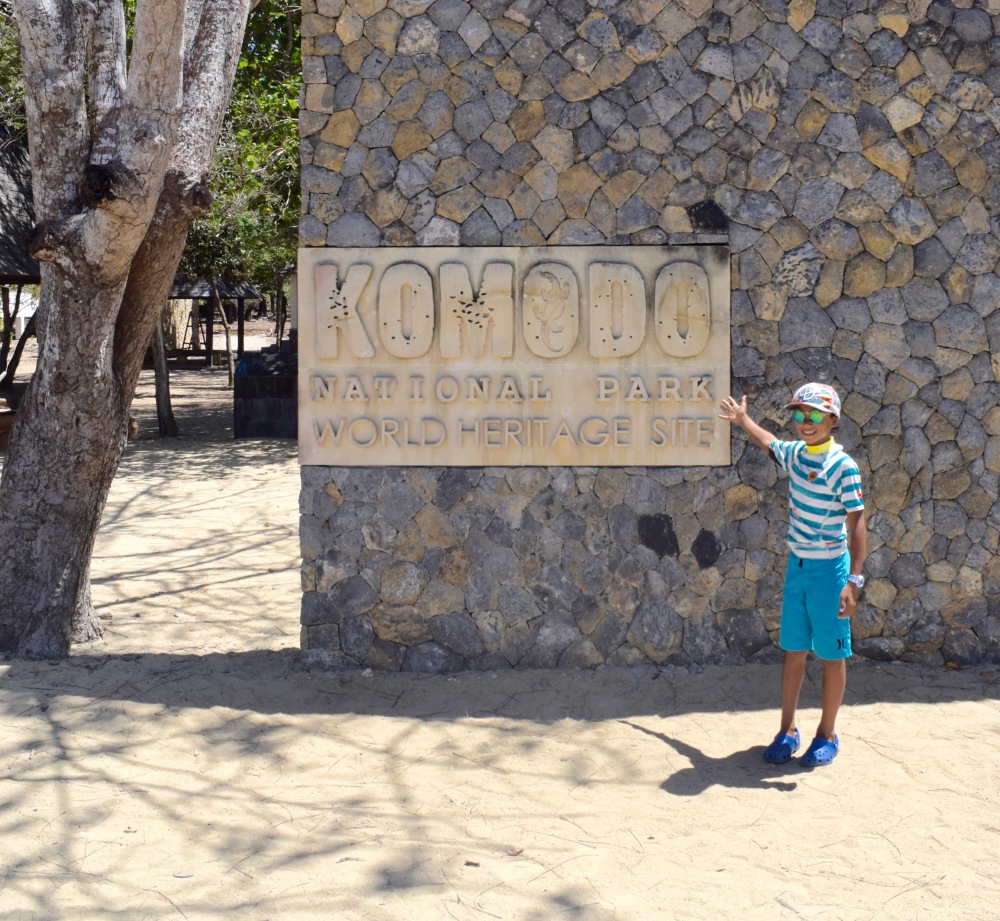 We walked into an office and bought the tickets for the tour around the island. Our ranger pointed towards a Komodo dragon that was just passing by the office! I ran too see and sure enough, there was a 2 metre Komodo dragon walking towards us. Luckily, we were on an elevated platform but otherwise I would’ve been in trouble. 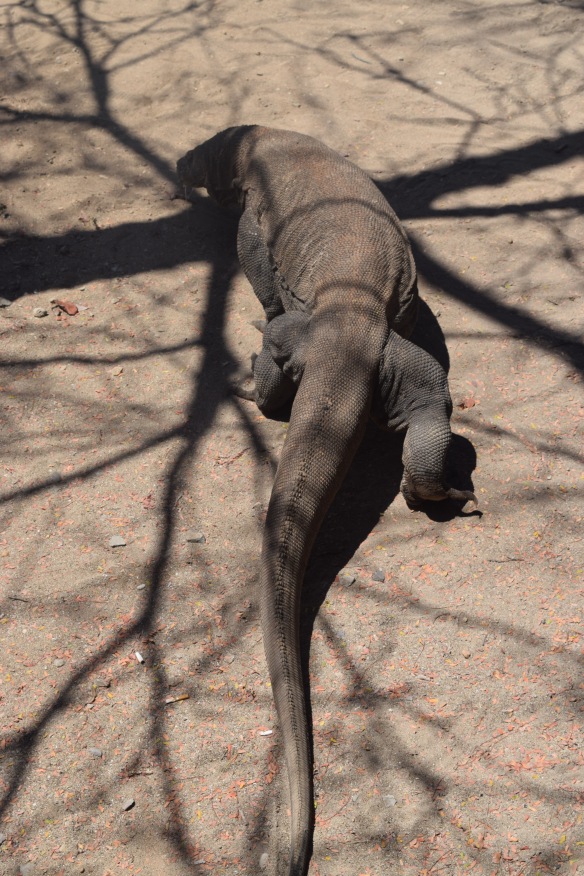 We were told to stand back because the dragon was drooling which wasn’t a good sign. It had short but chunky arms and legs with five fingers on each hand like us humans, long nails and a very long tail that was almost as long as its body. Its skin looked as hard as armour and really scaly and Ronnie said that if I would try to throw a small stone at a Komodo dragon it would not feel a thing! Komodo dragons don’t have their arms and legs standing up straight, they have them sticking out of the side of their bodies so when they walk it looks a bit like a snake zigzagging across the ground. The Komodo dragon walked under the elevated platform and onto the stony path ahead.

We rushed off to follow the enormous beast ahead of us. Our ranger offered to try to get as close as he could to the Komodo dragon and took lots of photos from the front for me. As we followed the enormous lizard, I could see lots of villagers living in their houses normally and children were chasing Komodo dragons too! It was crazy how relaxed they looked when they saw a huge deadly poisonous Komodo dragon walking past their homes, but they are probably used to it by now and know how to keep safe. After a while, the huge beast we were following wanted some peace and waddled off into the forest. We carried on and followed our ranger and Ronnie who were in front of us looking out for any unexpected Komodo dragons. The thing I liked about the Komodo National Park is that the Komodo dragons were not all locked up in an enclosure but they were able to walk around and be independent and free, but the bad thing about that is that it is more dangerous for the villagers.

We were told that most mating starts between May and August. Dominant males can start fighting for the females. Using their tails for support, they wrestle in a standing-up position, grabbing each other with their arms as they try to throw each other to the ground. The female Komodo lays about 30 eggs. She lays her eggs in a big hole and digs lots of other holes to confuse predators and keep her eggs safe. While the eggs are incubating (about nine months) females sometimes lie on the nests, protecting her future children.

Then hatchlings are born. As soon as they are out of the shell, they scramble to their feet and run up the nearest dead hollow palm tree! They do this because their mothers actually turn on their children and savagely eat them. I can’t believe that Komodos are so horrible and even eat their own kind and I am amazed that the babies just know to run up but I think it’s just their own distinct. They choose hollow trees so that they can have lots of space to live in for few months and their mothers cannot climb. The babies who have survived their mothers feed on insects, small lizards, snakes and birds. In the end, about half of the hatchlings survive before their mother catch them. As they grow bigger, the   young dragons move on to bigger preys such as rodents, monkeys, goats, wild boars and, when they are about 5 years old, the most popular Komodo food: deers. Slow growth continues throughout their lives, which may last more than 30 years.

As we carried on, Ronnie spotted a baby Komodo scuttling around the trees. It was about 3ft long and was very fast. Our ranger said that he or she must’ve hatched last year. We moved on as it ran away deeper into the forest and spotted a big male Komodo on the top of a small cliff. We decided to climb up and have a closer look at him. He was a big 8 feet long male that was asleep so we were careful not to wake him up. He had one eye open and I got to look very close to him. It was really amazing to see how he reacted to different noises when we spoke by twitching his eye and blowing hard out of his nostrils.

It is know that Komodo dragons can see objects as far away as 985 feet (300 meters) and use their long forked tongues to not only taste things, but also to smell things like snakes. 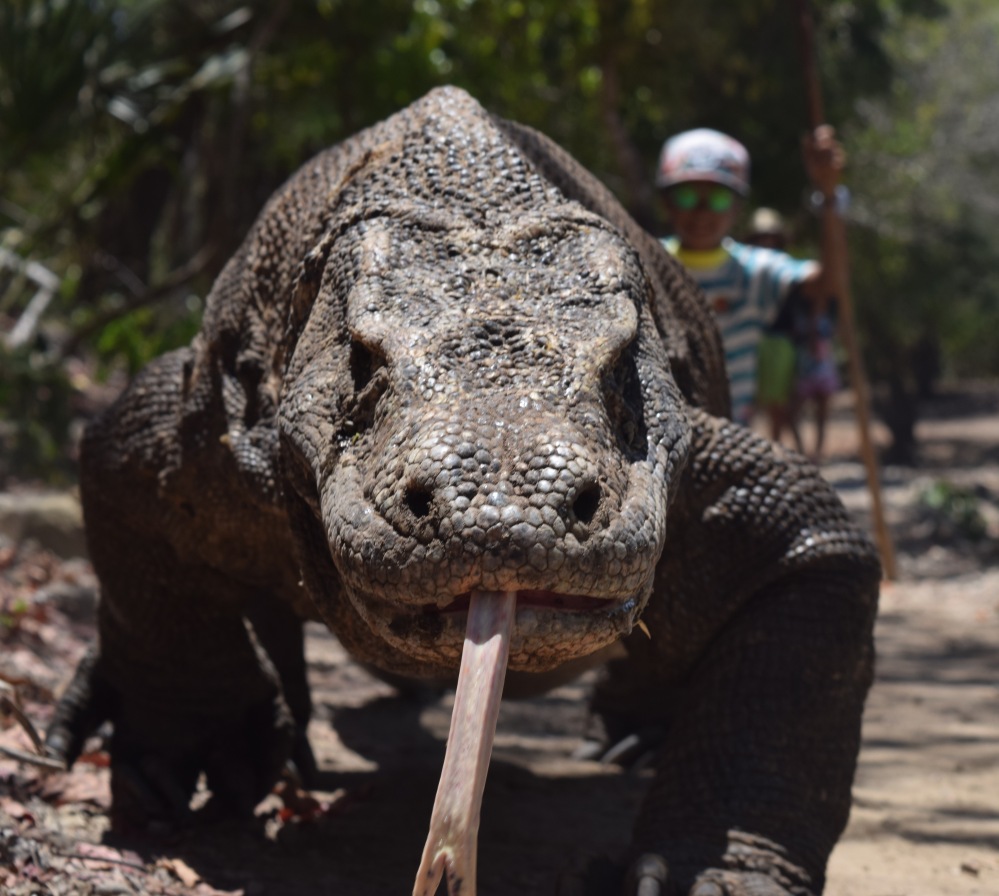 We were walking back towards the pontoon when suddenly a big male walked straight in front of my sister and I! We ran out of the way and I gave my camera to our ranger to take a video of the big dragon. I had seen so many Komodo dragons that day! He had a long, flat head with a rounded snout, scaly skin, short legs, and a huge, muscular tail.

As we were heading back to our boat to carry on our adventures, my mum screamed. She had gone to the beach with my baby brother to take a picture of the ocean and found herself face to face with a Komodo dragon. We all rushed towards them and the ranger managed to keep him at a safe distance using only a long thin stick.

We thanked him and we all left onto the boat again and headed to pink beach and Manta point (you can read Capucine’s great post about Manta rays on the blog).

Komodo dragons are such amazing creatures and I was so lucky to have been there on one of a few islands in the world where one can see some! It was so amazing getting to know so much about them and getting so close up to these fascinating reptiles. I hope I get to go back and see them again one day.

One thought on “Komodo dragons – Apollinaire”